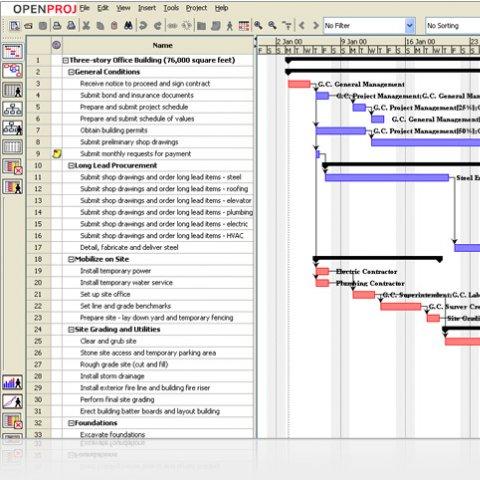 OpenProj is an open-source software designed for project management. It is a free alternative to the commercial software Microsoft Project.

It is also available for Linux, Mac, Unix and Windows and since a lot of people contribute to the project, OpenProj is available in a number of languages like Finnish, Korean, Russian, Spanish, German, French and many others.


Since it can serve as an alternative to Microsoft Project, OpenProj can open both Microsoft and Primavera files so you won’t have to worry about file compatibility. It also has the same scheduling engine with Projects-on-Demand, a software-as-a-service (SaaS) for project management through web browsers.

OpenProj offers Gantt Charts, Network Diagrams (PERT Charts), WBS and RBS charts, Earned Value costing and more so there won’t be any problems should you or your team wish to switch to using OpenProj. Teams are able to switch to OpenProj free, regardless of the size of the team or type of project.

OpenProj, developed by Serena Software, is deemed to be one of the most important additions to the open-source community. It closed the gap between users of different operating systems, as well as those who speak different languages. In addition, it has the most advanced scheduling, resource and cost algorithms in the industry, and is provided for free by Projity.

It also offers a user-friendly interface, a wide file compatibility (even with existing MSProject files), and the same functions as that of Microsoft Project. It is simple, straightforward, and very easy to use. And with over 1 million users, and counting, OpenProj is certainly one software that project managers and their teams would love to have.

This work is distributed under the CPAL License.