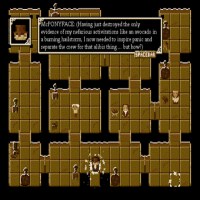 If you hate figuring out games, then stay clear from Youdunnit. This is perhaps one of the most confusing indie games out there. However, if you are up for a little challenge and don’t mind taking a Tylenol or two, this game would be right up your alley.

The game was created under 48 hours so don’t expect it to be perfect. In fact, it’s this confusing gameplay and headache inducing storyline that makes the game quite intriguing. It was created as an entry for the Global Jam Games and since then has gained notoriety among indie gamers as a weird yet must-try murder “mystery” game.

The story is all told in the title. There’s a murder that happened and everyone wants to know who did it. Of course, you are the killer but you have to keep your story straight throughout the investigation to ensure that you won’t get caught. This is where it becomes tricky since the detective will be asking things that you wouldn’t expect. It’s important to always be on your toes and to definitely get your entire story straightened out.

You have to make sure that the detective doesn’t discover any inconsistencies in your story. At the same time, you have to prevent everyone else in the room from establishing a clear alibi otherwise the fingers will be pointing at you.

As for the gameplay, it’s best explained by a dude named, James in his blog. He writes:  The game is played in a series of levels that go progressively farther back in time. At each point you have to commit actions that implicate one of the other suspects. What makes this difficult is that while you do this, you have to interact with other people and things and, in order to preserve causality (your lie), you must remember what you did in the future so you can take the appropriate steps in the past.

It’s actually a very cool gameplay if you really think about it. It’s just extremely difficult and confusing once you actually play it. So, if you’re up for a real challenge, download this one and see if you can keep yourself from getting caught.