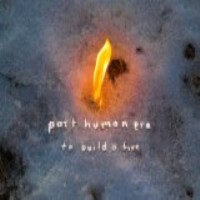 Two brothers channeling Deathcab for Cutie along with Radiohead. Perhaps one of the biggest pull that Post Human Era has on its listeners is the fact that they incorporate plenty of elements into their tracks. There are tracks showing hints of Nine Inch Nails, Kraftwerk and even the Postal Service.

Underneath all this layering and synth work, there are nice vocals and sweet melodies that remind you of Ben Gibbard at his best. Daniel Finfer usually does the job himself inside the studio, but on the road, he jams along with brother, Michael, on samples, Steve Kurschner on drums as well as Josh Stark on guitars.

Who would have thought that referencing Rene Descartes on a song would actually work? However, Post Human Era does pull it off in one of their tracks. To Build a Fire compiles 12 melodious and often catchy songs into one big crockpot of sound and melody.

From the cheerful background synth of Lost Children to the danceable, Postal Service-esque track, Replacing You, the band showcases diversity. The vocals, done by Daniel, himself, are also worth the praise. He consistently achieves the desired effect for each track and gives any particular song the right treatment; never overbearing, never oversampling. His range is also impressive, brooding one moment, happy and cheerful on the next, or simply pensive on other tracks.

Containing elements of electro pop and post rock music, Post Human Era manages to create a healthy blend of sound that revolves with different themes. Whether it be a social commentary or simply a story of a boy aching for a girl, To Build a Fire is definitely worth dropping a few minutes on and maybe more.