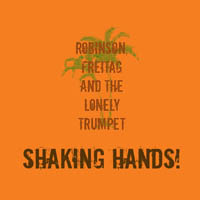 At just about every moment during this 10-track album, you’ll be waiting for the musicians to break into laughter, and they actually do at some points.

But Shaking Hands is not just a joke, it’s an infectious combination of calypso beats and lo-fi magic. Either you’ll get it or you won’t, but if you do, it’ll leave you wanting to go out and buy every island-themed album ever made.

Remember when you were 10 and you had that Casio keyboard that played automatic chords and rhythms when you played a single note? Imagine an entire album of that, with some guitar strumming added in for good measure. And if you think that sounds silly, wait until you hear the vocals – strangely vague affected island accents that are so ridiculous, they probably border on offensive. These guys claim to be from “Coco-Town, Cocos (Keeling) Islands,” but if you believe that, I have a bridge for sale. I think they may be located in Germany, although one of them appears to be Czech, and… wow, I don’t even know. The information on their web site is so bizarre, it’s difficult to know what is true and what isn’t. But I have to admit that the stuff they write, both in song and in description, is great fun. I’ve spent more time reading about them than I’d care to admit.

The rhythms of the respective tracks don’t offer a lot of variety, but the band makes up for that with tremendously catchy beats that will definitely make you want to move your hips. The song lyrics are a mixture of semi-serious and not serious at all; themes range from the traditional “I’m so lonely without her” all the way over to “if loving my blood relatives is wrong, I don’t want to be right.” It makes me laugh just to think about it, and I think listeners will either get this kind of humor, or they won’t. Give it a try and see which category you fall into.