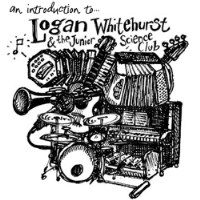 Logan Whitehurst and the Jr. Science Club: An Introduction To

Quirky songwriter and musician, Logan Whitehurst, has been known to many people as the dude that sings about robot cats and how it never rains on a guy named Alex. He’s performed in several bands including being a founding  member of indie rock band, The Velvet Teen.

Although Whitehurst’s career was cut short because of his illness, he released some catchy yet quirky tracks in his solo project; dubbing himself as Logan Whitehurst and the Jr. Science Club.

An Introduction To is a set of tracks from Whitehurst’s repertoire, including some of the more recent ones he recorded before he passed away. This cheeky artist has been releasing most of his songs online since 2007 and he has gained quite a substantial fanbase. Although he is best known from his indie electronic group, the Velvet Teen, that didn’t stop him from exploring his less serious side.

Most of the songs he recorded in his 4-track starting 1997, are available for download and for purchase on Mp3.com. His songs feature comical lyrics and fun instrument work. As an accomplished instrumentalist, Whitehurst not only played the drums on his songs but also a host of other instruments like the accordion, guitar and piano. The comedic musician has been praised by a lot of critics, enough to get a comparison to comedic singing duo, Flight of the Conchords.

His last album was a posthumous compilation composed of short tracks (ranging from 30 to 90 seconds) which was done in over 2 months. It was released on December 26, 2006 after his death from recurring brain cancer.

This work is licensed under a Creative Commons Attribution-NonCommercial-NoDerivs 2.5 Canada License.