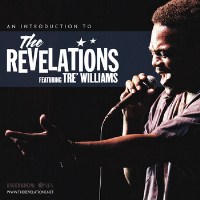 The Revelations feat. Tre Williams: An Introduction To…

An Introduction To… is a collection of several blues and R&B tracks sung by soulful group The Revelations featuring Tre Williams.

If you have a special place in your heart for lovely blues music; then this album will be a terrific find. It has all the right elements of the genre and exudes awesome talent as well as fine musicianship.

This 9-track album served as a sampler for fans prior to The Revelations releasing their full length record, Concrete Blues. Filled with great instruments, catchy hooks and some fine, fine singing; it’s hard to deny the beauty and allure of this album.

Much of the album is composed of tracks done by the band over several years. It also includes 5 cuts that was included in their debut album, Concrete Blues which was released last November 8, 2011.

Listening to The Revelations is like being transported to the heydays of 70s soul jazz. They have the capacity to create mood and great atmosphere with their songs. Opening with the sultry, Graceful Bow; the album starts with a track that’s a complete lady-pleaser. Sing this track to any woman in your life and you’ll definitely get some good vibes.

Much of the other cuts combine gorgeous lyrics and smooth rhythm. You’ll get songs like Until You Get Enough of Me, which is a track professing love to a woman despite incurring infidelity. There’s also, How Could You Walk Away, which laments a partner walking away from the relationship. Meanwhile, Heavy Metal Blues, combines a more funky blues feel that includes some fine guitar riffs.

Overall, the album covers a lot of bases when it comes to the themes. They include social commentary tracks as well as R&B staples about relationships, love and sex. Vocally, Tre Williams lets his talent come to a full shine; crooning sultry tracks one after another. In the end, this is one of the few albums you’ll put on without ever feeling the need to skip out on a track. Beautiful songs with great craftsmanship; it’s definitely worth grabbing.