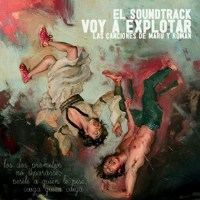 Las Canciones de Maru y Roman is the soundtrack to the Mexican film Voy a Explotar; roughly translated as “I’m Gonna Explode!” The film tackles the story of Roman and Maru, two angry teens who decide to go on an adventure while making a pact to remain with each other at all times.

The actual soundtrack which included music from the film, was initially geared for a commercial release, however, this didn’t pan out.  This current album is a compilation of 22 tracks handpicked by Carlos Reyes, the person behind Latin blog Club Fonograma. It is now the official soundtrack for the film and is offered absolutely free. Like the film, the record is an explosive combination of music genres, moods and instruments. Definitely a perfect accompaniment to this coming-of-age film.

The film is directed by Gerardo Naranjo and is the latest effort from Canana; a film production outfit from actors, Gael Garcia Bernal and Diego Luna. The album is a wonderful compilation that sees 22 different artists giving their permission for their music to be used as part of the official soundtrack. It’s an amazing mix of instruments and genres that perfectly suits this intriguing film.

When planning the soundtrack, Reyes initially wanted to have it filled with just Mexican bands. However, after realizing that the themes don’t only run native to Mexico but all of America, he changed his mind.

In his words:“My initial idea to have a soundtrack with Mexican bands was put aside once realizing the narrative and themes of the movie are not exclusive for Mexico, but all Iberoamerica.”

Some of the must -listen cuts in the record include Prin’ La Lá – Naves que dan vueltas a un balon; Los Fancy Free – El mundo me espera and Nubes En Mi Casa – Mareo, to name a few.

It’s a record that successfully captures the feel and essence of the film. The perfect accompaniment to the adventure of two young, rebellious teens trying to find their place in the sun.