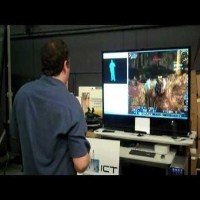 Geeks, gamers and everyone in between have been buzzing about the new “hacked” Kinect being used to play the lord of all RPGs, World of Warcraft. Scratching your head? Up until recently, we were too.

Developed by a team from USC Institute for Creative Technologies, FAAST takes Kinect and allows users to play Warcraft using hand and body gestures. You can lean forward to make Garrosh, Thrall and company run; swipe your left hand in the air to move the camera or raise your hands to fire on a target. This Flexible Action and Articulated Skeleton Toolkit is revolutionizing the gaming world as we speak. Developers aren’t stopping there. The team hopes to squeeze more from this free Kinect “middleware.” One thing’s for sure, it’s about time there’s technology that will get WoW players off their asses.

Microsoft was initially hesitant to allowing Kinect to be hacked but thankfully, they did agree and it has certainly opened up a whole new world of possibilities. Indie developers took up the challenge and it wasn’t long before hacks for this Microsoft Motion Sensor started coming out. Each one presenting its own, fascinating way of using this system.

But perhaps the biggest buzz generated as of the moment is the development of FAAST. By taking simple hand and body gestures, the program awesomely makes gameplay for WoW (and other titles in the near future) much more interactive and fun. Of course, since it’s still in its initial stages, the movements are still limited. You can check out the video below for a short summary of what this cool software can do. The software clearly paves a path to showing how bright the future of gaming as well as gaming consoles can become.

The team at USC ICT have big goals for the free software. Currently, it is designed to work with any off-the-shelf games but the team hopes to expand it. They are looking into the possibility of turning the software into a bridge for helping stroke patients and those that need physical rehabilitation regain their strength. The group is also hoping that with FAAST, they can lessen down the rate of obesity (leading to diabetes) by stimulating movement among young children or gamers in general.

You can download FAAST for free through their official page or simply click the Download Software option on the upper left of the screen. It’ll lead you to the site as well. Read through all the instructions first before giving it a go. Enjoy!