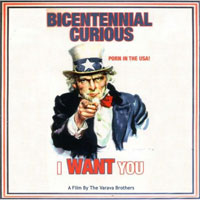 “The fact of a matter is that I don’t make movies about wizards and magical forces, I make real films, real films about real tangible things (…) like love, religion, the national deficit.”

The documentary follows Mick Jones and the cast during the making of his 73rd adult picture (titled as the movie itself) – Bicentennial Curious. Interlacing sex and American history, the production features characters such as John Madams and Dwight D. Eisentower, beautiful Suffragettes, and Henry Wadsworth Longfellow.
The most clever elements in the movie, and its main plot line, center around the interviews of the actors and the director of the production; all of which explain why working in the porn industry is their ideal career choice (especially for a character of Renée Ohio, Suffragette #5, who feels extremely uncomfortable and offended talking about culture and politics, but is more than happy to discuss sex).

However, there is also a look on the opposing side of pornography as the camera follows the townspeople who gathered right in front of the film studio with signs such as “Protest the Breast!“. As the voices of the protesters grow louder and louder disturbing the filming of the subsequent scenes of the movie, the cast and the crew decide to also take it ‘to the streets’. And so they go to face the townspeople with their own signs which read “Protest the Protest of the Breast“. (Caution: socially-relevant reference to WalMart is also included!)

Overall I found the short to be a wonderfully crafted mockumentary about, as the creators call it, ‘the making of the history in the making’. The script, written by Justin Varava, brings with it a great collection of wit and sarcasm that will surely keep you watching till the very end.
So go ahead and press ‘play’, because Mick Jones has some important things to say and its all 100% historically – not – accurate.