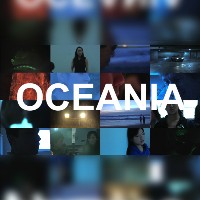 Heartbreak, broken homes and teenagers. Those three things are the main elements that you’ll find in Oceania. The film is written and directed by Harry (Harpreet) Dehal and revolves around the lives of teenagers as they handle the breakup of their parent’s marriage in a small California coastal town.

Although the storyline is a bit jaded, the storytelling and cinematic style is intriguing at best. For a film done on less than a $4,000 “lifetime savings” for then 17 year old Dehal, it’s a film that showcases what a whiz kid, a camera, a passion for storytelling and film can do.

Filmed mostly in the San Francisco Bay area, Dehal created the movie with tons of help from fans and family. Volunteer cast and crew were drawn, mostly from popular all-around site Craigslist, along with less than $4,000 as a primary budget. It was released back at the 2008 Cinequest Film Festival and played to a sold out audience. Since then, the film has been put under a Creative Commons license and has been available for download online.

Although it was a bit of a challenge to download the film (it took several tries before I managed to get it playing on VLC); once you get it up and running, it might surprise you. The cinematography is quite good and the soundscapes and editing are worth waiting for.

For an inexperienced film maker, Dehal, manages to get his vision across and takes hold of the audiences attention enough to help them finish the film. For his first foray into “this filmmaking thing,” he deserves more than just a pat on the back for creating an engaging drama that hits so close to home for many teens all over the world.

With some experience under his belt, it’s not unimaginable to see this young filmmaker’s future projects get as much or even more praises than this one.

As for the few gripes, there were parts where the lines seemed so well rehearsed that you could almost swear that the actors were reading from an idiot board behind the camera. The film has its special moments though and despite the bleak storyline, the delivery was, nevertheless, engrossing.