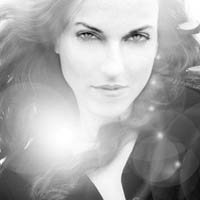 Cellist Maya Beiser plays a gorgeous eight-part modern etude with seven copies of herself, and segues into a meditative music/video hybrid — using tech to create endless possibilities for transformative sound.

Music is Steve Reich’s “Cello Counterpoint,” with video from Bill Morrison, then David Lang’s “World to Come,” with video by Irit Batsry.

The founding cellist of the Bang on a Can All Stars, cellist Maya Beiser is a frequent collaborator with artists across the spectrum of creativity — visual artists such as Shirin Neshat, video artists such as Irit Batsry — to produce groundbreaking multimedia concerts.
Composers who write for her follow her passion for melding influences — Middle Eastern sounds, classic and modern tones. Her newest project, Elsewhere, is described as “a CELLoOpera.” Elsewhere is an imaginative retelling of the Biblical legend of Lot’s wife, created by the “dream team” of Maya, director Robert Woodruff, composers Missy Mazzoli and Eve Beglarian, writer Erin Cressida Wilson, and choreographer Karole Armitage

From the artist:
“Imagining a solo cello concert, one would most likely think of Johann Sebastian Bach unaccompanied cello suites. As a child studying these eternal masterpieces, Bach’s music would intermingle with the singing voices of Muslim prayers from the neighboring Arab village of the northern Kibbutz in Israel where I grew up. Late at night, after hours of practicing, I would listen to Janis Joplin and Billie Holiday as the sounds of tango music would be creeping from my parents’ stereo. It all became music to me. I didn’t hear the boundaries.

I still start every day practicing playing Bach. His music never ceases to sound fresh and surprising to me. But as I was moving away from the traditional classical repertoire and trying to find new ways of musical expression, I realized that with today’s technological resources, there’s no reason to limit what can be produced at one time from a single string instrument.

The power and coherency that comes from one person hearing, perceiving and playing all the voices makes a very different experience. The excitement of a great orchestra performance comes from the attempt to have a collective of musicians producing one unified whole concept. The excitement from using multi-tracking, the way I did in the piece you will hear next, comes from the attempt to build and create a whole universe with many diverse layers, all generated from a single source. My cello and my voice are layered to create this large sonic canvas.

When composers write music for me, I ask them to forget what they know about the cello. I hope to arrive at new territories to discover sounds I have never heard before. I want to create endless possibilities with this cello. I become the medium through which the music is being channeled, and in the process, when all is right, the music is transformed and so am I.”