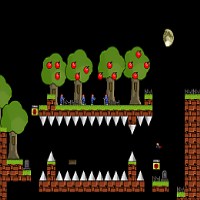 IWBTG (I Wanna Be The Guy)

I Wanna Be The Guy or better known as IWBTG is not exactly a simple love story. Well, it is about a dude going on an adventure in order to become THE guy. It doesn’t stop there, I’ll tell you off the bat that it is extremely difficult. However, if you are a glutton for punishment and love being pushed around into complicated, near impossible feats, you’ll probably hold this game close to your heart.

Another thing to note is that if you are a hardcore NES or SNES fan, you’ll be grinning from ear to ear when playing this game. IWBTG combines modded levels of your favorite NES games like Megaman, Battletoads and even Contra; creating a one-of-a-kind, hair-pulling experience.

Definitely a hardcore game worth checking out whether you loved Nintendo or not.

IWBTG definitely takes the words “tribute” to heart as it recreates various iconic levels from various games. The attention to detail is amazing, even the soundtrack is the same. However, like most games from the era, the level design is extremely difficult. If you feel that every single level was designed to kill off your character, well, you’re right. It won’t be unusual for you to go keyboard bashing once in awhile whenever you play this game. The good thing though is that the game is quite funny. It’ll be a mixture of laughter and tears of frustration but it’s definitely worth it.

The game was originally created back in 2007 by Michael “Kayin” O’Reilly. Currently, it’s no longer being developed but it looks and works great as it is. In fact, you get two options when it comes to downloading the game, the “Slo Mo” version or the “Frame Skip” version.  The former slows down the action whenever your CPU is taxed because of the game while the other simply skips frames if the CPU can’t handle it. The latter is perfect for speedy computers.

In the end, anybody who loves Nintendo should certainly give this game a try. Sure, you might get frustrated and end up spewing profanity once in awhile, but you’ll definitely laugh out loud and have a great time as well. Besides, it couldn’t hurt to try, can it?