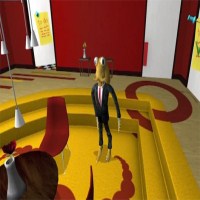 Octodad is cool new game that features an octopus acting like a human being. The game’s theme focuses on destruction, deception and even fatherhood. Now, how those three things actually make for a good game. It’s up to you to find out. One thing’s for sure though, even though there are some really weird story lines going on. The game is quite fun to play.

The game was created by several students at DePaul University in Chicago. It was started last June and developed and prepped to serve as an entry for the Independent Games Festival Student Showcase at the 2011 Game Developers Conference.

This journal-style, third person game is filled with funny moments, odd game controls and lots of destruction. Definitely a game worth trying out. The game features an odd take on fatherhood; from the perspective of an octopus. You will be put in control of an 8 legged animal that has no limbs and hands  while doing all the necessary tasks of being a human being or a real father. Being in this position creates some troublesome tasks for you.

If you watch the trailer, you’ll quickly understand that the story revolves around an octopus who has somewhat convinced a human woman and her two kids, that he is all human. Of course, he isn’t, so he’s always undercover trying to make sure that they don’t figure out his true identity. This isn’t that easy though since his limbs are definitely not designed for taking care of household chores.

The game controls are as crazy as how Octodad looks like. As a player, you have the option to control his arms and his legs. All you have to do is toggle using the space bar, choosing which ones you need to use. Pressing the A and D keys will allow you to take a look around and control the cameras. The mouse lets you control his octo-limbs. Although there’s no difficulty in walking, Octodad does look hilarious with all his tentacles waving around.

Overall, the game is a bit tough. However, it does bring enough humor and fun to make it really likable. It’s an awesome alternative game to all those mundane, typical shooters and platformers out there. Give it a try.