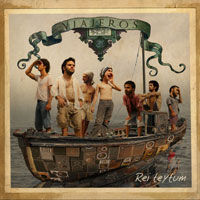 A wonderful fusion of rock, funk, folk, jazz, brass with some great sounding guitar, percussion, violin, viola, keyboards, trumpet, sax, bagpipes!?, and yes, even harmonica. It seems that Rei Teytum have it all, except of course for an English version of their bio anywhere on the Internet.
So it is times like this that I wish I spoke more languages to bring you important information about the artists. But since that will simply not happen lets focus on their fantastic album, “Viajeros” (“Travelers”), and the tiny bits of band history I was able to get (courtesy of my friend Google Translate).

“Viajeros” got my attention for one main reason – it is filled with a variety of music styles that, well, seemed to fit perfectly together. From the trumpet, drums and percussion that all of the sudden, in the middle of the song, make you feel like you are listening to jazz only to be followed by a harmonica solo, which than gets back to great rock sound and vocals (No Va!). Or the sound of bagpipes that just for a second makes you forget you are listening to an Argentinian band instead of roaming of the streets of Scotland (Viajeros). And than you have some amazing electric guitar solo among a jazz trumpet in Una Inquietud. Plus how can you not love the sound of violin in the background of many of the tracks.

The band was born in City Bell province of Buenos Aires, Argentina in April 2006 when Manu Gil, Fran Garriga and Seba Minvielle came together in order to pursue their own musical dream. After some time Julian “Tatum” Cueto joined the band and together recorded the first demo; a fusion of different instruments and genres ranging from rock, funk, ethnic, and folk. Following the release the band got the opportunity to perform in the many great venues of La Plata and Buenos Aires. As the number of performances grew so did the visiting guest musicians from which Pablo Fitipaldi became a permanent member.
In 2009, the band decided that it is time to record their first album titled “Viajeros” (“Travelers”), a task that was completed a year later. So why “Travelers”? According to the official bio the answer is pretty simple; the band wanted to find a ‘path to happiness’ so they ‘traveled’ through music.

This work is licensed under a Creative Commons Attribution-ShareAlike 3.0 Unported License