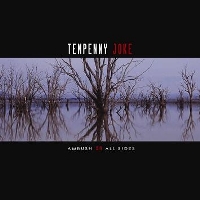 TenPenny Joke: Ambush On All Sides

‘TenPenny Joke’ are a Pop Rock band from Australia and prior to their current hiatus, the band had been playing and writing for over ten years. On top of this achievement, the band has been played regularly on Australian radio and has even appeared on television a number of times.

The album ‘Ambush on All Sides’ brings a quality that can be expected from 10 years of experience and its mainstream style reveals an attempt to connect with a larger audience. ‘TenPenny Joke’ have promised ‘15 original, killer tracks with diverse shades and roaring guitars’ and its success on both internet polls and radio shows suggests that this is a fair call.

‘She’ gives an adequate preview of what this band is capable of. In particular, the ‘Jungle percussion’ used within the intro and verses, exhibits the drummers versatility and talent. Furthermore, the Chorus of this song offers a thick and powerful texture which is created by ‘the roaring guitar’ described above and thick and rich vocal tracks. An intense section of guitar solo also squeals the sounds in which all rock fans crave. Finally, an outro played by the strings gives this song the sending off it requires. After listening to ‘She’, a viewer will be able to explain why it has over 31000 viewings on Jamendo.

‘Across the Ocean’ is also worthy of mention. It is one of the more laid back songs on the album and its vocal melodies are immensely catchy. Slow guitar solos and riffs litter this song and in verses the vocals are similar to those found in some Linkin Park songs. ‘Sirens’ sounds almost identical to music produced by ‘The Butterfly effect’, while other songs on this album sound similar to famous bands such as: Papa Roach and Nickelback.

If you are into rock, download this album and encourage this awesome band to end their Hiatus!