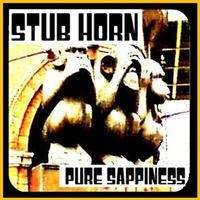 An interesting alternative grunge rock band, Stub Horn releases their first foray into the music business with Pure Sappiness. Contrary to their album title, the group isn’t exactly sappy about their music. They incorporate a blend of punk, alternative and a slight tinge of indie, to create their own music.

Switching between loud rock to a mid-tempo sound, the group manages to showcase their love for a louder type of sound.

Stub Horn is one guy who never showed up on time at work, but woke up at 6AM on his days off to write songs. In December 2009, construction work is over, he’s had it. He locks himself up for 3 month and practice singing, at which is very unskilled at this time, take time to write songs efficiently, learn to record and mix DIY, propped by his cultural friend Google… (Last FM)

Although I’m not really sure who exactly Stub Horn is, all I know is that these three guys are simply making music they like. Pure Sappiness might not be a completely unique or very original album compared to other alternative records out there but it does have its own personality. Songs like Come With Me and Make It Real are quite catchy. They’re the type of alternative rock songs that stick to you after a couple of listens.

Recording quality is good, although there’s still a slight rawness and maybe even awkwardness in some songs; nevertheless the guys manage to pull it off nicely. Influenced by such greats as Nirvana, Pink Floyd, Queen, Sublime and even Michael Jackson; “the band doesn’t claim to be the best, but will do it’s best to get close.”