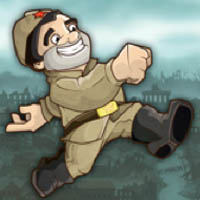 Victory March is a fun side platformer that has you playing as a war hero. You can take your pick in playing an American soldier or as a Soviet one. The main goal is to simply jump from one platform to the next while killing enemy soldiers.

Developed by Anton Butsev, the game features a very addictive gameplay that will make you want to play for hours on end. It’s certainly a great game that’s worth checking out.

The game offers 6 different levels. Your goal is to simply finish each level by jumping off the platforms and shooting enemies that get in your way. You have to do this as fast as possible while taking down the Nazis that you encounter. The game also offers two different modes of gameplay as well as a good range of weapons.

Graphics for the game are really good. It’s done in a 3D style, which adds to the interesting gameplay. Soundtrack is excellent and provides a sense of excitement to the game. Moreover, there’s a good variety of tanks and rockets that you can use in the game.

Overall, the entire game is simply tons of fun to play. It’s very addictive so you might want to set aside a good portion of your time when playing because you’ll definitely want to play more until you finish it.