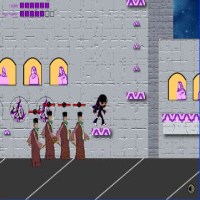 Ninjabi is a short platformer game that follows Layla, a Muslim ninja, that seeks to defy and fight off the oppression she experiences in an un-indentified Muslim country. Now, yes, the game did gather quite the reaction from different sectors when it was first released.

Controversy aside, the game contains a very fun gameplay and definitely worth enjoying on your spare time. Despite the protagonists’ fight for independence, the game does showcase great respect for the Muslim culture. It is filled with imagery and soundscapes that represent the culture.

As mentioned, the protagonist of the game is a female ninja character named, Layla. She tries to fight for her right by defying the preset rules ordained for her. She does this by tagging walls, leaping across platforms and even knifing the bearded guys out to subdue her. Every time she successfully spray paints a wall, several of the windows light up; showing other women who applaud her defiance and showcase her strength. The more support she gets from women, the more she gains courage to ultimately fight off “the bad bearded guys.”

Although it’s hard to deny the controversial undertones of the game, it is very straightforward and plays really well. It’s not exactly spectacular and perhaps without the undertones it might seem boring, but it is worth checking out and enjoying. It won’t take long to finish anyway, so give it a go.