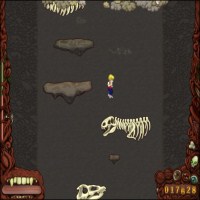 To Hell with Johnny

In To Hell with Johnny, you find yourself having the worst of luck. Nothing goes right. First, you suffer a broken car. Second, a storm comes in an bombards you. To top it off, your girlfriend gets kidnapped by demons. So now you have to go ahead and rescue her; going through hell and encountering countless vile creatures.

This is where your journey begins, as you attempt to rescue your girlfriend while fending off monsters that you encounter on your way.

The game is offered as a free download in both IndiePub and Michi. The former contains updated graphics and new creatures.  The game can also be purchased if you want to go ahead and help out the developer. Despite its typical premise, the game is quite addictive to play. After your girlfriend gets kidnapped by demons, you must follow suit by descending from a huge tower. Be careful where you land on since there are traps in every corner.

It’s important that as you descend and explore the area that you don’t touch any of the creatures lurking about. The moment you do, your health immediately goes down. Be extra careful as well when around skulls and crossbones as these will instantly kill you.

Of course, you do get to collect a medikit that will restore your full health. Also, for every time you step onto a platform, you should be able to gain a bit of your strength back.

To Hell With Johnny features 7 stages; each one more difficult than the next. There are plenty of challenges, secrets and rewards offered; making the game engaging and addictive. The graphics aren’t all that impressive but it’s pretty decent. The game was actually released quite a bit back but was revived and updated just recently. Although not spectacular, the game is pretty engaging. Once you start, it’s tough to stop until you finish the game.