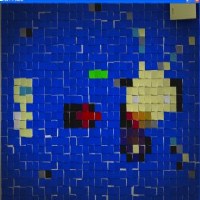 If you are a big indie gaming freak, then you might have heard of Petri Purho and at least one of his really cool creations. The Finnish game developer is known for his exciting and experimental games. Games like Cut It and this one, Sticky Notes Shooter (Post I.T. Shooter) is simply a few that you might want to try out.

In Sticky Notes Shooter, you fight off alien space invaders in the form of sticky notes. It’s a fun and extremely visually creative game that you’d definitely enjoy playing. Basically, the game was developed as a contribution to the Experimental Gameplay Project. Judging from the looks of the game, it certainly showcases a lot of originality. Based on non-trademarked sticky notes, the game was made in low resolution. However, it still features pretty interesting mechanics and the visuals is still amazing. Sticky Notes Shooter utilizes stop motion animation style of graphics; moreover, you get a random space invader almost every time.

In Sticky Notes Shooter, you play Tim L. The best and foremost trademark expert there is. Essentially, you travel all across the galaxy fighting off every single sticky notes invader that fights off your precious trademark.

Apart from really cool graphics, the game also has an awesome soundtrack. It plays perfectly with the visuals and definitely another big plus for playing Purho’s games.