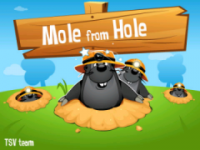 The Blackberry platform is pure-work and very little fun. So here is a sweet little arcade offering, Mole from Hole that will surely bright up your day. The game is not graphically intense and might still be in the shadows of those for iOS and Android, but it will certainly become a great casual game for all the spare time.

Developed by TechSoft Venture, these developers have quite a good experience with games for Blackberry users.

Mole from Hole will make your break between the board meetings a time-snipper. The game is very simple with nothing complex to it, with a Mole looking surprisingly decent, to say the least. In the game, players need to ward off as many Moles popping up from the hole from time-to-time. The game is played by hitting the corresponding key to the hole (Q, W, E, A, S, D, Z, X, and C, that is).

The games have three modes to offer, namely 1) Arcade – here the players need to eliminate as many moles as possible. Once you fail to hit 20 moles, the game is over. 2) Time – under this, players need to strike as many moles within a time-frame of 60 seconds, 3) 100 mole quest – this mode makes 100 moles pop-up, so you need to do your best and hit as many as possible. The game is simple, no rocket-science here.

Overall, this is a great game and should highly appeal to the very serious businessmen with a little kid hiding somewhere. A must try and a great initiative by the developers.