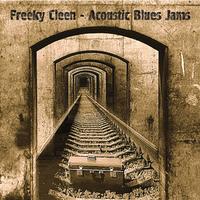 Blues has always had a special place in my heart so when I found this really cool record from Freeky Cleen, it definitely made me smile. Acoustic Blues Jams is a laid back and simple guitar driven blues jam from a one man band.

The project began back in 2004 when Ilya Polishchuk and Alex Okhrimenko decided to create their own recording studio, complete with instruments and systems that they created themselves. This was a big challenge but they managed to succeed. After taking the plunge, Ilya recorded a couple of original tracks which would eventually lead to Freeky Cleen’s debut record, Infertility, back in 2005.

To date, this is the sixth release from the artist. Acoustic Blues Jams is exactly like its title. It’s a hodge podge of beautiful blues jam sessions accompanied with Ilya’s country style vocals and clean acoustic guitar playing. The album contains 15 tracks including 3 bonus singles.

Starting with the catchy Married Man Blues, the song laments temptations besetting well…a married man. Featuring great guitar skills and a very laid style, the song is instantly likable even after just one listen. The vocals and backing voice lends itself to the song and definitely add that touch of sincerity to the lyrics. Other tracks like Feelin’ Low Down, echo a more rhythm and blues vibe reminiscent of various blues artists who pretty much spearheaded the sound. Elements of hard rock, country, bluegrass and even boogie woogie dominate Freeky Cleen’s sound; providing audiences a chance to enjoy this long-forgotten sound especially in today’s pop-driven music world.

Overall, the record is a great one to have for those who know how to appreciate acoustic blues. It’s a beautiful and relaxing compilation that makes you want to find yourself a bayou somewhere with guitar on hand and singing the afternoon’s away. You’ll find the record in Jamendo as well as on the band’s official website.