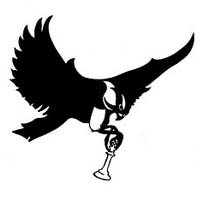 Another great release from Rock Proper, an online music distributor for quality rock bands who license their music under Creative Commons. Jitney is a new project from Casey Meehan (the founder of Rock Proper), who after a some adventures with major labels moved from New Orleans to Chicago to release his first album “Violet” on the Tense Forms label in 2003.

“86-300” is a well composed classic rock album with some insightful lyrics. The title comes from the number of Meehan’s Chauffeur’s license (he was the 86,300th cab driver to be licensed in Cook County). He’s been a night shift taxi driver for two years, writing the lyrics on a dashboard while trying to earn some extra money to finance his album.

“Other than the late-night, cityscape imagery of streetlights, gasoline and drifters, this album explores the element of chance”, explains Meehan. “There were many setbacks for this musician in recent years, including nearly loosing his leg necessitating many difficult months of recovery. This material explores dealing with forces beyond ones control; the song “Fin” may be interpreted as a brief commentary on the struggling music industry.”