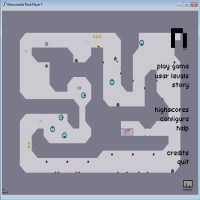 One of the most addictive and sometimes frustrating game you can ever play, N is an award winning title that involves tons of jumping, climbing, and running.

The game was created by Metanet Software back in 2005 and won the audience choice award for the Independent Games Festival that same year. Today, the game has spawned a console (multiplayer) version for the Xbox Live Arcade, the Nintendo DS and the PSP titled, N+.

N was originally offered as a flash game but you can download it now onto your computer. There’s a version available for the Mac, Linux and of course, Windows system.

N has you playing a cool stick-figure ninja with all the abilities of a super cool hero. Your main goal is to complete each level by navigating through each one and avoiding various obstacles laid in your path. You also need to collect gold coins while heading for the exit door leading to the next section.

There are only three keys to use for controlling your character. You have the left and right arrow keys for movement and then the shift key for jumping. A combination of these allows your ninja to climb up vertical walls, slide and do all those cool things ninjas do.

About 99 levels are available for you to play; half of which were contributed by players themselves and handpicked by Metanet. Certain levels lets the player decide which exit to take while others only provide one way out. Moreover, there’s a time limit for finishing each level so you have to be quick on your toes in reaching the exit. Gathering up the gold coins however, increases your time by 2 seconds.

The game is done in 2D but its graphics are quite classy. Controls and reaction time of your ninja are pretty fast; making it effortless to have him running around everywhere. Of course, the puzzles themselves can be a bit of a challenge. There are times when the game becomes insanely frustrating because it’s hard to figure out how to finish and reach the exit. Nevertheless, it is definitely fun to play. It’s not just for those looking for a quick game in between breaks but for those who love a great brain-draining challenge as well.

N on CNET
N on Wikipedia