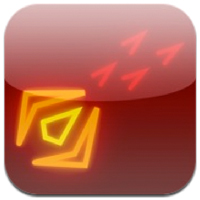 Hailed by many as one of the best shooter games available for free download on the App Store, Pew Pew has certainly lived up to its name ever since it was released.

The game is a multidirectional shooter that’s actually similar to Geometry Wars and another shooter game we’ve reviewed here in Frostclick, called Grid Wars. It plays perfectly on both the iPhone, iPod Touch and iPad.

Similar to Grid Wars, the game features a ton of retro graphics, an assortment and a bombardment enemies as well as a very cool gameplay.

Shortly after it was released, the game was considered as one of the hottest Android apps available. It’s still gaining plenty of fans as we speak. Don’t expect any in-depth story or plot in here because pretty much the title is all about gameplay. The game is packed with tons of features that hardcore gamers will particularly enjoy.

MegaGore/Pandemonium: Playing this lets you encounter different types of enemies. Some of them will explode while others will be spinning around everywhere. Players can courageously navigate themselves through the explosions or simply hide from them.

Dodge This: In this one, players collect various boxes while tons of enemies bombard them from left and right. They would need to constantly keep moving and avoid them.

Assault: For the assault game mode, you might just try this one for yourself.

Chromatic Conflict: Players will be fighting against different colored enemy ships. However, they will only be limited to blasting off and killing enemies that have the same color as the player’s ship.

Apart from having four options in game mode, there are other features that has helped define the game and win its share of devotees. The high frame rate as well as smooth gameplay are both something to commend. Soundtrack is also perfect and players have an option to display their scores online. Not only do they get to submit top scores online but there’s also an option to watch a replay of the game by the top scorer.

Overall, this one is worth checking out. It wasn’t labeled a “hot app” for nothing, right?