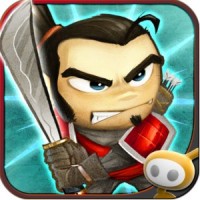 We have played a lot of zombies games and some of them have really blown us away with the level of realism packed inside. This is what Samurai vs Zombie is all about. An action-packed game with oodles of characters and wonderful surroundings.

The game was created by Glu Mobile, a developer that has joined the A-league of smartphone game developers long time ago. Since than, Glu has produced some of the most amazing game titles such as Frontline Commando, Blood & Glory, Guitar Hero, Gun Bros Multiplayer and many more. Samurai vs Zombie really sticks to the legacy of great gaming fan.

If you think about Samurai vs Zombie as a run of the mill mindless game, think again. The app has a certain feel to it which helps it to create a niche in the casual gaming segment. What Glu Mobile really achieves here is creating a game out-of-the-box without making it look like a mash up of their past titles.

Samurai vs Zombies defense puts players in the shoes of a heroic samurai who has sworn to defend the gates of his sacred village against the oncoming horde of brain-dead attackers. That onslaught just happens to be coming from swarms of zombies who are hungry for some samurai bite. Game graphics are really neat with some really nice visuals thrown in here and there, keeping in mind the Freemium legacy of Glu Mobile.

The controls of the game are the definition of simplicity. Hold to the left of the screen to go left and hold the right for right. Players are blessed with additional power-ups and ability to call in reinforcements that sit on the bottom of the screen and can be commanded with a single touch.

Players are not left to their own fate for defeating the brain-dead junkies. Aside from being armed with a bow and arrow and a powerful sword, players also have full ability to seek help in the form of summonable samurais that will join in their fight. Archers, swordsmen, warriors, and eventually even riflemen and heroes on horseback will come to help.

Overall, the game is full of action, adventure, hack-and-slash, fast-paced gameplay, awesome visuals so-on and so-forth. It is a freemium app and hence the need of integrating in-app purchases was a must for Glu, but interestingly players need not make any in-app purchase to smoothly glide through in-game levels. A very big boon to enjoy this marvel of a game.