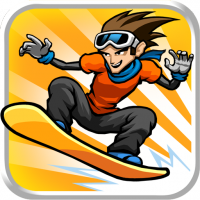 It is time for the adrenaline fans to hit the slopes for some freestyle action. Yes, iOS houses one of the best physic based games and this one is called iStunt 2-Insane Hill. The sequel to the original iStunt game, it takes the gameplay to an all new level.

Developed by Miniclip.com, the game is really great and does much more than the original version. Offering a vast game-play and some very tricky obstacles, this one will surely become a casual gaming fans delight.

This time players will have to brace up for the extreme slopes on the icy hills and avoid all sorts of danger to complete the level. The game in itself is very simple, but what really turns up the heat is the speed, so go ahead and test your reflexes.

In-game players can make a complete back-flip just with the help of the gyroscope – and the response is amazing. In addition to this slick-trick, players can also perform front-grab and rear-grab with ease during gameplay adding the extra points. Something that I loved personally is the fact that the game is highly intuitive. It is not a brainless point-and-click game, but requires the user to react ASAP.

Players need to collect green flags on their way down hill to get segregated ratings in Gold, Silver and Bronze. Players will definitely enjoy the physics of the rag-doll in the game, sometimes the head gets chopped off and the body gets mutilated. Nothing graphic, gory and disturbing though. iStunt 2 – Insane Hills features many in-game attractions, such as, Gravity Inversion and Zero Gravity Zones for free-falls and instant reactions, Rails to gain extra points, Boosts for a super-fast adrenaline rush, Fans that make you change course, and Floating mountains out of nowhere!

Overall, iStunt 2 – Insane Hills is one-of-the-most Insane game ever played on iOS. This will please hardcore as well as casual gamers alike. Moreover, with perfect iOS Game Center integration and Social-network sharing, the game takes competition a step ahead for sure. Happy gaming everyone.