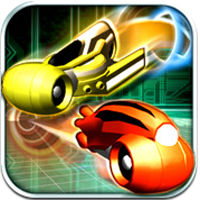 Here we have something for the real speed-junkies, yet again, so prepare for a heavy dosage of adrenaline rush with LightBike 2 (the sequel to the worldwide mega hit LightBike). This time around the game has come with some heavy duty updates to enhance the game-play and take the overall game experience to an all new high.

Created by Pankaku Inc., this developer is no new kid-on-the-block as far as iOS is concerned and has quite a few apps under its belt. The developer releases new versions of the app in series and that is something commendable. So instead of just releasing minor updates, a revamped version will always make the users smile.

The game-play is very simple and does not take much time getting used to. The new version has a Jump mode added, which increases the pace of the game by leaps and bounds and manages to immerse the player in the game. Visually, LightBike 2 is highly appealing and will be treat for every gamer who drools on HD graphics.

There are two games modes now, Death Match Mode and Standart Mode. The game has also an ample room for a nice gaming session without tiring the player. My personal favorite mode in-game is the “Ability” mode, under which the players can gain an ability and use it only once in a game. The ability is like a huge boost, that will help a player gain an edge over the competition. ‘Abilities’ include Turbo Boost, Rocket Jump, Protector, Stealth, Slow Down, Air Turn, Double Jump, Fast Charge, All Jump and All Boost. Wow, that is quite a number of abilities to help you win! Want even more? LightBike2 is a multiplayer heaven by supporting upto 4 devices over Bluetooth. Users can also play a 1-on-1 game on the same device.