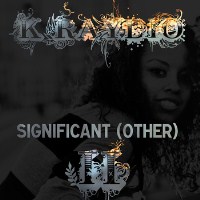 K.Raydio is a great example of someone pursuing their dreams regardless of the odds. The 22 year old singer was broke yet had big dreams of going after her passion for sound.

The result of her perseverance include two EPs, a host of performances around in landmark concert venues in the hometown, plus a good and solid following. The singer was able to do all of this in just under a year.

Real name, Krysta Rayford, the singer hails from Minneapolis and was born from a family filled with musicians. “Her mother was a singer and guitarist and her father was the son of a blues musician.”

Significant (Other) II contains a great mix of tracks that reek with R&B, soul and blues influences. This album was released back in March 2011 and produced by Man Mantis. Opening with the chill out cut, It’s Alright; the song features the artists’ breezy and club lounge sound. It’s the perfect single for some quiet time in the bar or maybe a chill out cut for a simple evening.

Prayin‘ is the only track not produced by Man Mantis. It features Charlie Kim and is a simple pop R& B single that shows off K.Raydio’s great vocals. Meanwhile, I See You, features JDante. The song has a nice rhythm thanks to the cool keyboards and great mix of vocals and rhymes. Protocol, in the meantime, is more laid back, and showcases the singer’s R&B flair. Finally, the 6-track compilation is finished off with I See You (Zone Out) again with JDante.

The EP was recorded in response to the singer’s debut EP Significant (Other.) The previous album received such positive reviews from listeners that the singer turned to recording this in answer to demand. Take a listen to the download. It should be worth it.