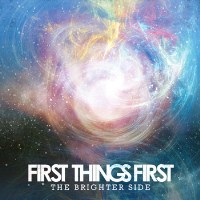 First Things First: The Brighter Side

If you enjoy power pop bands like The Click Five, Fountains of Wayne or even, The Ataris; First Things First could be your next favorite band. This three-piece Pennsylvania natives have been busting their behinds slowly climbing their way to the top. By promoting themselves and making sure they create the right contacts in the industry, they’ve managed to become one of the most fastest rising local acts in the pop punk Pennsylavania scene.

The Brighter Side is the band’s debut EP and comes with 5 great singles. These guys definitely know their strengths and how to play on it, jumping from one seriously catchy track to another.

Cranking up the power pop sound like nobody’s business, the band kick starts the mini EP with their catchiest track, Let The Good Times Roll, Kid. With a nice catchphrase – we’re the kids your parents warned you about – the song storms through hooks and pop riffs to create a track that you’d love to sing along to and enjoy. It definitely sets the mood for the record, opening it in a brilliant way.

The next three tracks, Love is for the ____, Queen of Mixed Signals and Stuck on Repeat are equally energy filled. In fact, the first four cuts are all true funlovin’ pop punk cuts, the kind that generates some serious energy when played through crowds. The boys however, switch gears in the final track, Broken Limits (We’re So Caught Up in This.) They slow down and showcase their more melodramatic side.

First Things First is made up of Stephen Schriner, Steve York, Vinny Cappello and Chris Guglielmi. With endorsements and support left and right, the band is said to have achieved “more in one year of being together than most bands do in three due to hard work, dedication and loyalty to their art.”

So if you’re looking for some lighthearted fun loving tracks to just make your day a little brighter. You can grab this compilation and enjoy it. This should be worth checking out.