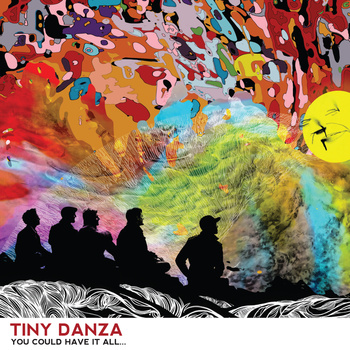 Tiny Danza: You Could Have It All…

It’s not an understatement to call Tiny Danza‘s You Could Have it All… one of the most accessible and vibrant hip-hop album I’ve encountered in years.

Hailing from Toronto, Ontario, this six-year old group traverses a variety of genres from hip-hop, dance to r&b. With musical influences like The Roots, Led Zeppelin, Donny Hathaway, Michael Jackson and The Beatles, it’s not a surprise that the group’s new album is a plethora of polished tunes and potent lyricism.

Tiny Danza have already been accustomed to the spotlight with several features on magazines, music blogs and TV shows. They were recently chosen as the winner of Indie Week 2011 and have completed a successful tour of Eastern Canada.

Beat Fly gets the party started with thumping drums, a danceable beat and a kick-ass chorus that’s full of soul. This particular single is now available in the latest release of ROCKBAND for Xbox and PS3.

So Much Right Now keeps the funk with an interplay of sexy tight-rapping and stellar r&b vocals. This sensuous piece will slowly tickle your ears. Illiad, on the other hand, is a tight-knit of glossy verses, chimes and jazzy tunes.

One standout feature of Tiny Danza‘s music is their flawless attempt to combine different genres and make them all feel coherent rather than cash-grabs. Songs like Caught by The Game, Hindsight and The Grind perfectly showcase this character.

All in all, You Could Have It All… provides a perfect representation of Tiny Danza‘s great potential. The sheer range in this album will keep you high and moving. This is certainly a must hear for 2012.

According to the group’s Facebook, Tiny Danza has now changed their name to Nixon.