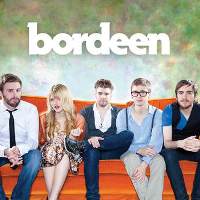 Let up and coming band Bordeen fill your daily dose of energy with its fresh alternative rock tunes. The Ontario-based group satisfies both rock and pop aficionados with its eclectic mix of new pop, southern rock, and old school harmonies.

Bordeen consists of Ryan (lead singer), Daniel (drums), Brianna (keys/vocals), Murray (guitar/vocals/sax), and Billy (bass). These guys have created waves in the Canadian music scene. They have recently been nominated for a GMA award and won Band Showcase events.

Featuring twelve tracks, the album screams “fun and raw” in its entirety. What makes the band enjoyable is the youthful glow it reverberates in each of their song.

Kicking things off is Sometimes. Heavy drum beats opens the song while steady guitar strings seamlessly penetrate to give flavor and support the clean vocals.

Following with a surf rock vibe is Broken Bones. Press play and let the energy created from the fun and playful arrangement rub off on you. This is quite the ideal track to lighten up your day.

Don’t Close Your Eyes gets my vote as the standout track of the album. The pop and alternative rock are equally balanced here, creating a textured piece that’s also rhythmic and enjoyable to listen to.

Big Plans (Reprise) closes wraps the album in acoustic goodness. This charming track highlights a performance from a childre choral which does not only makes this heartwarming, but also adds flavor to the piece. Listen and let this track make you all warm and fuzzy inside.

All in all, Bordeen has the makings of a band that will definitely make a name for themselves. These guys know how to play their aces well on their chosen genre in such a way that’s enjoyable and easily-digestible.