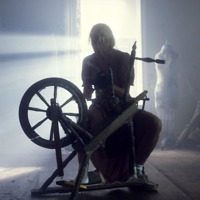 Since its release, this 15-minute short has already gained attention from the festival circuit with official selections, nominations, and awards such as Best Short Film in the Eeerie Horror Film Festival 2012.

The film tells the story of an old woman battling for youth and desperation. Her dilemma amplifies when she finds caterpillars lurking all over her house, only to find out that this nuisance would be the key for her long sought self-acceptance and happinness.

Fields’ background on concepts, production, and photography flawlessly translates to the film as each frame spills with visual spectacle and rich symbolism. The precise remoteness of the character to the outside world opens more room for images that plays within the boundaries of magic realism.

With special effects artist Ben Bornstein (300, The Fightet), visual effects artist Greg Silverman (The Black Swan), and editor Corey Bayes (Haywire, Contagion, The Informant, Che), the film lives up to the big names behind it. Scene afer scene, the audience is treated with beuatifully haunting images and a subtle examination on youth, happiness, and acceptance.

David Field has marked his brand on the film industry. Caterpillar is a must-see movie even for film connoisseurs.