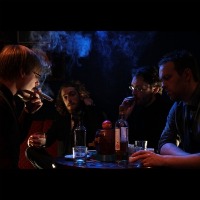 Coroner for the Police: Gentleman’s Relish

They are the Coroner for the Police. They are a 1920s mobster rock-punk band with a penchant for a good suit.

They are the fact and the reason why you will have loads of fun listening to music for the next couple of minutes. Hailing from the United Kingdom, Dave, Nathan, John and Dan formed the band at the start of 2012 in a clingy warehouse then gigs followed wherein beers were drunk and friends were made.

The Gentleman’s Relish was released November of the same year they started. Kryptonite Blues at track number one has a heavy punk rock tune and influence from Queens of the Stone Age can be easily recognized. It wastes no time and starts off with a vociferous drum beat. The riffs are bold and straightforward and the vocal screaming was blended melodically and perfectly despite the short track duration.

Hat Topped Head is slightly toned down compared to the previous one that induces a more acoustic rock feel. It has an addictive mid-tempo beat that makes your foot tap involuntarily and nod your head unwillingly due to its joyfully abstract nature. As The Crow Flies features the most powerful vocals in the compilation. The bass level is fantastic and the climactic instrumentals will keep you hooked.

Rope is a fun, raging song and The Other which tops off the five track album nicely. The band was able to display their full talent in their last but certainly not the least song.

Coroner for the Police is a very strong band which will practically blind side you. It stays true to the roots of the punk rock genre and delivers well to the listeners’ hype and expectations.