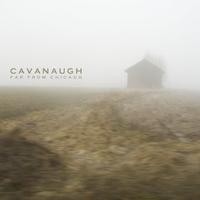 At the mention of the phrase “music from Sweden”, the odds are you’ll sing in your head a line or two from Dancing Queen or, if your affinities lie at the opposite pole, make a mental list of your favorite death metal bands from that part of the world. Much as outsider impression of Swedish music is limited to the spirited disco pop of ABBA and the baneful loudness of the country’s vibrant metal scene, a genre that’s somewhere near the confluence into which these opposing musical streams flow is peeking out for some attention.

Cavanaugh, a four-piece band from Borlänge, Dalarana, is among the proponents of this genre, which the group unabashedly calls “mainstream rock”. But even as we hear that from the band itself, a deeper look into its music reveals sensibilities that have recently been missing from the mainstream scene at large. The 2009 EP Far From Chicago, spirited as it is in a way heavy, is without most of the unneccessary trappings.

The songs are rife with beautiful, catchy – but not maudlin – melodies, insinuating regret and forlorn feelings over what has long been gone but still pined for. The melodies and their delivery take cue from 80s rock ballads, but not the ones bordering on metal; they lean much closer toward the work of post-Eagles Don Henley, as in the artist’s The Boys of Summer. To achieve this, band employs a little heartland rock, in the vein of Bruce Springsteen and Tom Petty.

The instrumentation, come to think of it, exhibits the greatest amount of the mainstream flavor the band speaks of. With the innocuous chugging guitars on Get It Right and modern-day riffings on Fade Away, the band’s message is clear: it wants to be relevant. And indeed, it is, and not necessarily at the expense of its musicality.