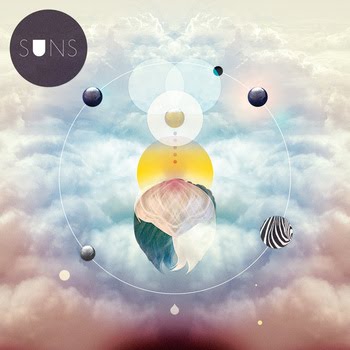 Suns: The Howl and The Many

The most distinguishable thing about listening to The Howl and The Many is the thunderous rumble when the toms are played. It’s actually two drummers, Clinton Weber and Chris Pagnani who use mallets through a good chunk of the songs. Mikey Russell sings lead vocals as a sing along at times. Nick Enderle’s guitar is sometimes sparse and sometimes deafening. Matt Lemke is a jack of all trades playing rhodes, magnus, harmonium, synth, guitar. Kody Nixon plays bass and banjo. There is also mandolin, a violin bow on a guitar and clarinet to round out Suns orchestra.

I have seen Chicago based Suns play 5 or 6 shows and can confirm that they sound just as amazing live as they do on The Howl and The Many. These songs are sweeping epic monsters that make you rethink what you thought you knew about how seamlessly a band can mix indie and regular rock music. Other noted influences are post rock and also a tinge of Americana courtesy of Mikey’s vocals.
“Gladys” is sparse and shows that Suns can manage all of the notes they don’t play. Being able to add only what is needed isn’t a skill that all bands can enjoy. Also the harmonium and glockenspiel are really nice embellishments to the sing along chorus.
“Four Winds” is my favorite track. It is a brooding piece of work that has the jazz influenced drums build in equal amounts with the shout vocals by all of the band members. Live, this song is almost a religious experience when the band plays full out.

Below is an interview I did with the very nice guys from Suns after only their 3rd show. Also a song they played.