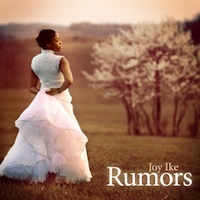 Joy Ike is singing her way into the indie stage with Rumors. The Nigerian-born singer/songwriter shares a part of herself as an artist with ten soulfolk tracks.

In 2008, Ike left her career as a publicist and has since then played over 400 shows and has had shared the stage with Deas Vail, Butterly Boucher, Dwele, Najee, to name a few. Refusing to box her music into one specific genre, Ike has played in house shows, theaters, coffee houses, churches, and various music festivals.

Sweeter welcomes the ears with rhythmic beat flawlessly intertwined with playful piano keys. But after this, a mellower, soft cooing flavor kicks in maintaining a delightful sonic experience.

Following with a slower, jazzier approach is Nomad. Bask in guitar strings and carefully-placed drum beats as Joy Ike sings her heart out on well-penned lines.

A personal favorite, How She Floats highlights Ike’s vocal prowess as she flutters and dances in between catchy piano play-ups. A cello solo in the middle adds texture and spice to this charming piece.

Power closes the album in a reflective note. Low, reverberating piano lets you dive into your inner core and float into soulful folk musings.

In Rumors, Joy Ike has left us breathless. The warmth of her voice, her honest lyrics, and courage to explore new territories makes this a one-of-a-kind album that’s worthy of repeats.