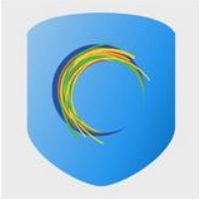 Hotspot Shield VPN is one of, if not the most popular VPN today, as this app from Anchorfree allows you to access websites that have been blocked in your network. So if you want access to such services like YouTube, Facebook, Netflix and Hulu but they’re blocked, you need this app.

Once you have installed Hotspot Shield VPN you can use it to gain unrestricted access to messaging apps as well as VOIP services, and the app will also provide security for your HTTPS and Wi-Fi by encrypting them, a very important feature so you don’t have to worry about hackers trying to steal information about you.

But Hotspot Shield VPN actually provides more, as it has data compression so your mobile phone bill doesn’t go up. This is a handy feature, though for many the most important feature is allowing you to browse anonymously and without worrying about your privacy. Because the app is compatible with Android and iOS, running it won’t be an issue either.

If you are worried about using Wi-Fi hotspots because you are exposing yourself then you will want to use Hotspot Shield VPN. Thanks to the way it has been designed, all Internet traffic generated here is encrypted so there is no way your IP address to be identified, and you have the option of sharing data with others. While it is possible to use the web without this app, there is no guarantee of your privacy, making this an essential download for many.