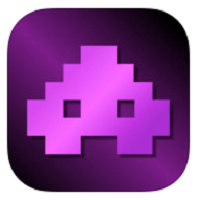 Hectic Space is a sidescrolling space shooter similar to what you’d find in retro styled games. Developed by James Swiney, Hectic Space may be considered lightweight, but it’s addictive. While the game has some familiar elements, there’s also a different feel to it thanks to the design.

If you’re looking for some classic sci-fi space shooters, Hectic Space won’t disappoint as all the ingredients of a classic retro game are here, but it’s been updated so that it works perfectly with mobile devices. With your touchscreen you can steer your ship away from the enemies while you keep firing.

Hectic Space may be old school, but it’s still a challenge to play as the enemy fire just keeps on coming and you’ll need to do some evasive maneuvers to steer clear from them. During the early stages your ship can take three hits, but as the levels progress your enemies become more powerful and you can get killed with just one shot.

However it’s not hopeless since there are plenty of power-ups in Hectic Space. Unlike other games where power-ups are hard to come by, here they’re widely available and really quite powerful. You get rebound shots, quick firing missiles, homing strikes, bombs and many more. The weapons aren’t just powerful, but the destruction they unleash is visually appealing.

Aside from the game itself, Hectic Space also benefits from a really cool techno soundtrack. The music is perfect for the game, and it syncs well with all the action. If you’re in the mood for some retro games, check this out.