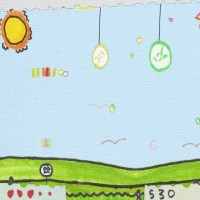 Incessantly compared to Ad Nauseum 2, Paper Dreams is an entertaining handrawn shooter from Zack Banack. The game features three difficulty levels, but even the “Easy” option will test out even the most patient gamers.

This shooter was created for the GameJolt Weekend Jam and was done in basically two days. Despite the short creation period, the game is insanely difficult to even finish. According to the developer’s site, the game is ported to flash by Kristian Macanga.

If you’re up for a good challenge, then you might want to give this one a go and see if you can even finish one level. Paper Dreams features three levels: Morning, Day and Night. These three levels differ in the look and type of enemies you’re going to have to face. Your main goal remains the same though, that is to shoot everything that moves.

Graphics for the game look like they were drawn by a 5-year old. The visuals and gameplay provide a nice contrast with each other. It’s not everyday you come across a hardcore shooter game with such colorful and adorable graphics. For controls, you use the cursor keys to move and the Z button to fire at the enemy.

You will have to target anything that moves and when enemies are killed they usually give up plus and minus signs. Grabbing the plus signs will boost your chances of surviving.

Saying the game is pretty difficult isn’t an overstatement because it is quite challenging. The good thing is that there are save options at the end of each level so you won’t have to go through it all over again in case you die. Give the game a try and see if you can even get past the Easy mode.

Paper Dreams v2 has been released recently as well. As GameJolt reports, the update features two new levels: outerspace and dreamworld, a few new weapons, over a dozen new enemies, bombs, changing weather and new gameplay. You can download it here.