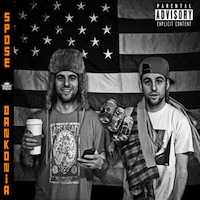 With Spose’s critical and sardonic style, he succeeds to bring out the farce of modern American life with comicalness and suave wordplay.

Spose’s distinctive trademark in hip-hop has led him to perform on stage with some of the biggest artists in music such as Wiz Khalifa, Drake, J. Cole, Ke$ha, B.o.B., and more.

What makes the Mighty Intro so compelling are the buttery rhymes and Spose’s ability to zero in on the rhythmic spots. The head-swiveling tactic of this two-minute starter makes this mix indeed “mighty.”

16 Counties is incredible, integrating the scratched Maine counties song and the clever allusions of Maine notorious figures. The ability of Spose to combine brilliant lyricism and great beats is just one reason why listeners should keep listening to this tape.

Bombs over Syria, even though brief, is crisp and is worth listening to. With electro-clash fabrication and superb chorus, this track will make you patronize Spose’s talent.

The mixes in this tape are extremely competent, and have enough slick beats. Though half the songs on this album are under three minutes, Spose definitely made his music does the loud talking.