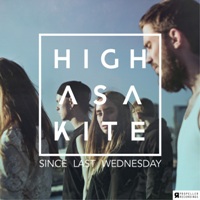 Highasakite‘s sound could not be boxed into one genre. The group is a musical wonder that marks its spot on the indiescape through dark undertones, flashes of lights, moments of silence, and sudden explosions of percussion.

The beat drops in title track Since Last Wednesday. The rich musical influences of the band is evident in this song, even after just a few seconds of playing it. The ambient chimes dressed in pop tempo jibe wonderfully with solid, echoing vocals that have tinges of hip hop and R&B influences. But the surprise does not end there, as Highasakite cooks up a celebration of tribal drum beats and layered instrumentation in the chorus.

Indian Summer, on the other hand, embraces a slower, pulsing rhythm. Helene’s vocal and inflections exude an air of innocence and other-worldliness. The Heron is a silent, dark gem that blooms in the ears with the notes piled on top of another, and then slowly disintegrate on their own natural phase.

Since Last Wednesday is a sure-fire hit for ambient, indie pop lovers. Highasakite‘s music will take you to immeasurable heights where beauty, sound, and darkness are in perfect balance.

Track List:
1. Since Last Wednesday
2. Indian Summer
3. Whatever That Means
4. The Heron