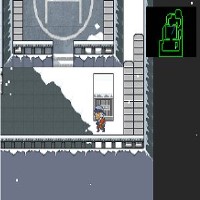 Solid Snake strikes again. This time, he’s an old 2D pixel character trying to retrieve Santa’s stolen hat from extremist group, The Ghosts of Christmas Past in Merry Gear Solid 2. If you are scratching your heads by now, Merry Gear Solid is obviously a spin off of Hideo Kojima’s Metal Gear Solid.

Merry Gear Solid 2 follows years after the events of Merry Gear Solid: Secret Santa, so you might want to download that first and play it. For those who don’t want to go through the trouble, luckily, Arthur Lee provided a short summary of what happened in the first game.

Basically, “Cold Snake” is now gray haired but since he was involved in the incident “3 years ago” where Saint Nick actually died, it was obvious to tap him for this current mission. Hence, this is where you come in. You play Snake and guide him through a set of levels as he attempts to find out what the extremist group (Ghosts of Christmas Past) wantwith Santa’s brain.

The game features conventional arrow controls as well as buttons CTRL, SHIFT, C and Z. The game isn’t exactly a piece of cake, but it’s not super difficult as well. The storyline is pretty quirky and don’t worry, even though Christmas is still far off, you’ll still have fun playing the game.

Moreover, fans of the Metal Gear Solid franchise will not be disappointed since Merry Gear has successfully captured the core of the franchise, from the extremely complex plot, the quirkiness of the bosses and even down to Snake’s voice. Pretty impressive, if you ask me.

Overall, the game is a sure winner, in almost all aspects. You get a good storyline, great, smooth graphics and a lot of fun.