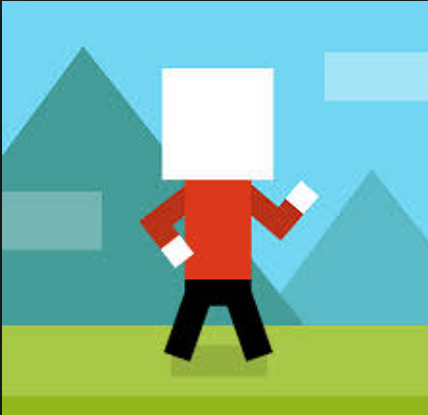 Mr. Jump from 1Button SARL is a seemingly simple game: it’s a sidescroller and as the name implies, your characters needs to jump from platform to the next. It’s a very easy game to pick up, but as is always the case with these retro style games, it’s a bit more challenging than that.

The first level isn’t that hard, but once you get to level 2 you’ll realize why Mr. Jump isn’t as easy as it sounds. Fortunately the game is a breeze to control as he runs automatically, and it’s your taps that control when he jumps and how high the jumps are.

That’s all there is to the gaming controls, but if you want to get far, quick reactions are a must because Mr. Jump is very sensitive. If he so much as hits a wall he’ll fall off. The first level has pretty standard jumps, but by level 2 you’ll have to do double jumps, which make progress more challenging. You’ll probably die quickly the first few times you play the game, but that’s okay since the restart button is there, and given its nature, you’ll want to come back to Mr. Jump again and again.

Mr. Jump can be compared to an auto running game, and while it’s difficult it isn’t impossible to play. Just remember that the key to survival is timing the jump: press to jump, and for longer jumps, tap the screen a bit longer. This takes practice, but that is what makes the game fun.