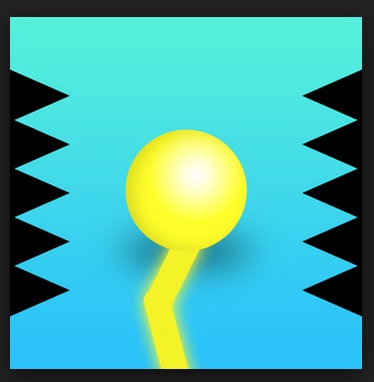 Skill Wave is one of the latest titles from Appsolute Games, and like their other titles this one can’t be easily categorized as it combines elements from other titles. This is basically a zig zag game but there’s a bit more to it than that, so don’t be surprised if you end up playing this far longer than you think.

Skill Wave is a one-tap game with elements of both shoot em ups and zig zags, and the setup could not be simpler. You have to control this small dot, which is pretty easy to do: to go right just tap and hold the screen down, and when you let go it goes left. That’s all there is to the movement controls, so it’s easy.

However you need to keep the yellow dot away from the obstacles and spikes that are all around its path. So basically this is a vertical side-scroller that is very well executed. Like similar games, there are power ups that give you a boost, and one of the most useful is the one that allows you to fire at the obstacles in your way. Other power ups include shields, speed boosters and more. The addition of these is a nice touch as it keeps the game from being too difficult.

Skill Wave isn’t the most original game available today, but that doesn’t change the fact that it’s a lot of fun. The game is free to download so if you’re a casual gamer this will be to your liking.