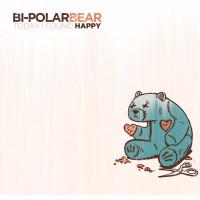 Hip hop psychedelia with great rap vocals to match. With a witty name like Bi-Polar Bear featuring an apparently heartbroken blue bear on the disc, it’s hard not to even try listening to this album. Self described as someone who sounds like Atmosphere, the duo, known before as “Strange Passengers”  have renamed themselves as Bi-Polar Bear after their second reunion.

All 11 tracks reflect a slight old school flavor with enough of a twist to make it their own. Of course, be warned there are explicit lyrics to this album, so if it’s not your trip, then steer clear. Otherwise, feel free to indulge. Bi-Polar Bear is the duo of Ugly Orwell and August. The album is a product of a dark period in both rapper’s lives that neither of them would want to experience again. The story goes that both rappers were almost at a brink of breaking in their lives, August was staying at a stadium while Ugly was nursing a nosebleed from an airport bar fight.  However, the answer to both men’s near drop-off was just one place, Brooklyn. The duo regrouped and christened themselves with a new name.

By 2009, the album Today I Found Happy started to form. It covers 11 tracks that are obviously as much a reflection of each artists struggles as well as personal passion for hip hop. The album starts with “Fuck Her” which is most comparable to Atmosphere’s style. “Test Your Might” is a catchy track that sees a collaboration with Kalo. This track also showcases the duo’s inspiration for starting their rapping careers. “NPFJ” is a short bio of August’s life which is reflected using modern religion.

Today I Found Happy is a solid compilation of songs that reflect how the duo has come through a lot. It’s a great mix of fast and downtempo songs that are not difficult to enjoy. The vocals are tight and the quality is pretty good. Bi-Polar Bear certainly knows how to express the soul of hip hop and at the same time integrate enough of the new stuff today.

If you don’t mind the explicit lyrics, then you’ll definitely enjoy this compilation. The entire album is available for free download on their website. You have the option to leave your email address or simply just press “Get the Album” to get to the good stuff without the hassle.