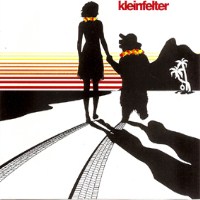 Kleinfelter is the former band name of indie rock group Lying in States. As Kleinfelter, the group released this 6 track record. It’s filled with intelligent math rock cuts that are filled with awesome rock swells and faded vocals.

These Chicago natives certainly know how to create music that sticks. Filled with noise, progressive elements and calculated rock, the album takes you on a trip to the unknown and back. Musically, the guys incorporate different elements into their sound. From hard rock, prog and even punk, the sound merges into a coherent sound that satiates any alternative indie rocker out there.

If you love Lying In States or simply a fan of indie math rock, then this is definitely an album to have. This self-titled mini album compiles 6 tracks including several that are great standouts on their own. Coroner’s Cut, for instance, is a dramatic rock anthem that reminds me of the Foo Fighter’s The Colour and the Shape; only a bit more sedated and less poppy. The jaded and mumbly vocals sound great against the loud instrument work. As for their new band’s namesake track, Lying in the State; the cut features interesting rhythm work that keeps listeners wondering where it’s going. Attempting to describe it would be like attempting to describe the subtle unison of ocean waves. It’s this variety and depth of layer that makes these guys interesting to listen to.

Meanwhile, another track that’s a personal favorite is the moody and frenetic Introduction. It’s just nothing but pure experimental noise that serenades your ear. By the middle part, you get this quiet, melodic guitar and bass work. Nothing else comes between you and the sound.

Although I’m not sure whether Lying in States/Kleinfelter, are still together until now. They did release about three compilations up until 2006.