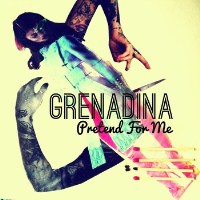 Grenadina is an all-girl rock band from the Kansas city area. Although they do have reservations about always being dubbed as an “all girl group,” their sound more than makes up for all those doubters.

Pretend For me is a gritty record that combines the band’s favorite genres. It sifts through rock, metal, punk, alternative as well as indie; fusing them with listen-to-me lyrics and performed in a look-at-me-attitude.

With their unconventional sound, the group definitely commands attention and subtly demands you listen to them.

Starting strong and determined, Eight Up, is a single that flourishes with dirty guitars and  even dirtier drums. At times the vocals sound whiny but there’s a beautiful layer of angst covering the single, giving it an intense almost breaking-point feel. You can sort of sense that someone is breaking soon and it’s not going to be pretty.

Nice Girls (Finish Last) echoes a Yeah Yeah Yeahs sound. At times though it sounds much older, as if it were a track you just discovered from an unknown band in your grandpa’s vinyl collection. That same “old school” sound makes the group a tad more fascinating. Meanwhile, Glamour Angst, adds a more upbeat tempo compared to the previous cuts. It’s also much clearer in terms of recording and the lyrics are more reflective.

Grenadina is a girl band that can cause some serious mental thoughts. Their sound isn’t for everyone and if you hate lofi or don’t appreciate the grittiness of experimental music, then it’s best to steer clear. On the other hand, if this is right up your alley, take a listen and enjoy.