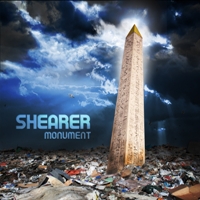 The underrated pop-punk band, ‘Shearer’ have literally forged an album that is deserving of a Monumental status… Alright, this statement may be parabolic to an extent; nevertheless, ‘Monument’ is still exceedingly addictive and wholehearted.

‘Shearer’ have endowed this album with a sound comparable to that of pop-punk band, ‘The Lost Profits’ and this vibe is most observable in the similarities between vocalists and guitar tone. In saying this, ‘Monument’ demonstrates a happier mood and reflects the bands nature, in not taking themselves too seriously. This nature is further reinforced through their self-proclaimed influences of: ‘Jaegermeister, cheap polish cigarettes and table water’.

Instrumentally, this band reminds me of ‘Millencolin’. Generally, this is due to a common use of cheeky, generic and ‘bouncy’ simplistic verses in which lead to texturally thick and climactic choruses. These are often fashioned through an extreme contrast in dynamics and an addition of harmonic and sometimes multiple backing vocals. Additionally, vocal lines in which intertwine with the dominant voiced melody are also regularly used to enhance this contrast.

The song ‘Day’s End’ kicks this album off and can be used as an apparatus in displaying the bands energy and emphasis. A single guitar and vocal line ensure a thin texture and this is shortly joined by a second guitar after one phrase. As a result, a much needed warning is formed for what is about to be unleashed. Finally, distortion is applied to the guitar, a complex bass line is added and a strong and constant drum beat creates a dramatically thickened texture. This is just one example of the bands ability in successfully achieving dynamical change.

‘Come On’ should definitely be viewed by those who are not familiar with this band. It is a slow and moving song with little appearance of percussion and a stronger focus on vocals. The bands singer displays a talent in projection and a convincing passion and emotion. Through the course of this song the bands versatility is also rendered.

Each track of this album contributes to its intensity and complements another. This album has been skilfully crafted and it does not take long to work this out. On their site, Shearer promises ‘No Bullshit’ and in this album they hold true to their word. Listen and enjoy!