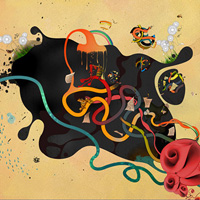 2010 SXSW might be over already, but you can still get some good free music from many labels. Exponential Records, Ninja Tune, Stones Throw, Daly City, Creaked, Innovative Leisure, and Fake Four have put together a 19-track compilation for you enjoyment and made is available as a free download to everyone.

With tracks from all over the world and across many different genres everyone is destined to find something they will like.


From Exponential Records
For the past 2 years we have welcomed in the SXSW festivities by releasing free compilations of Exponential Records music. This year we are doing the same except we have invited some of our friends and respected labels to create a compilation that showcases a few of our upcoming projects. We proudly present Kadohadacho…music from Exponential, Ninja Tune, Stones Throw, Daly City, Creaked, Innovative Leisure, and Fake Four.

A little bit of Texas history for you…the name Texas comes from the Caddo Indian word Tejas which means allies and friends…which serves as the theme for this year’s Spring compilation. To give credit back to the Caddo Indians we named the compilation Kadohadacho which means “True Chiefs”
The entire album is a free download so enjoy!

1. Diego Bernal – A Long Second
From the album Besides on Exponential

4. Poirier – Enemies ft. Face-T 2
From the album Run the Riddim on Ninja Tune

8. Sutekh – The Glorious Day Has Dawned
from the album On Bach on Creaked

9. Shlohmo – Hot Boxing The Cockpit
from the album Shlomoshun Deluxe on Friends of Friends

10. Aether – Tomorrows Thief
from the forthcoming album on Exponential

11. Sole & The Skyrider Band – Mr. Insurgent
from the album Plastique on Fake Four

12. Deceptikon – Kinyoubi
from the album Mythology of the Metropolis on Daly City Records

13. Day of the Woman – Jennifer Hills
from the forthcoming album D.O.T.W. on Exponential

15. Ernest Gonzales – Etchasketch Trees (Yppah Remix)
from the album Self Awakening EP on Friends of Friends

16. A.M. Architect – Ad Hoc
from the forthcoming album on Exponential

18. Mexicans With Gun – Me Gusto (Ghosts on Tape Remix)
from the album Me Gusto EP on Innovative Leisure

19.Cars & Trains – Asleep on a Train
from the album The Roots, The Leaves on Fake Four